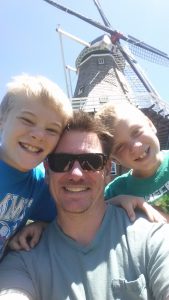 In early 2007 my oldest son, Evan, was diagnosed with autism. While his mother and I both saw early signs of this possibility the realization of this was fact was an extremely difficult journey. Thankfully, we were blessed to have local programs available to us for both resources and the sympathetic ears of others who are also on this journey of raising a child diagnosed with autism spectrum disorder. We enrolled him at 2 years old into an early intervention program called Early On that assisted in both Evan’s developmental delays and assist us as parents have tools to help him develop. They also gave us a list of numerous local organizations designed to help families like ours.

One of these organizations, Autism Society of West Shore, helped us create such a hope for Evan’s future that nearly 10 years later we continue to be part of the ASWS.org family.

I am happy to say that thanks to the tools that organizations like these have given us, Evan has had the opportunity to succeed. He is a warm, loving and intelligent boy making his way through each grade academically very well – and making great strides socially too. He still has his challenges, but we have very high hopes for his future. 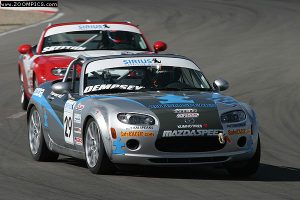 Shortly after Evan’s diagnosis and after the fear of the unknown subsided, I wanted to reach out to others that were experiencing the same things that we were. As a race driver and car owner at the time in the Mazda MX-5 Cup Championship, I had the opportunity to place a charity on the car for a few races. This turned in to a non-stop mission to promote autism awareness through motorsports and racing. 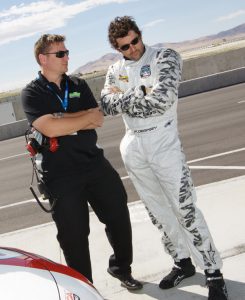 During 2007, the Autism Speaks Mazda MX-5 Cup car competed in eight events, logging over 5,000 miles on the race track to promote autism awareness. At the pinnacle of the promotion were two featured race events where the car was piloted by actor and race car driver/enthusiast, Patrick Dempsey. Patrick did not hesitate to support this and be a wonderful friend to provide his support.

Heading into 2008 I felt it was important to find ways to give back to families and program in West Michigan. Friends would ask how they could help raise

awareness for autism and the Race Now For Autism concept was born. The goal was an avenue to promote racers of ALL disciplines willing to compete in the name of autism awareness. Runners, swimmers, bikers, race drivers or a myriad of other racing mediums – it didn’t matter – as long as they were RACING for autism awareness. Provide them with a medium to promote themselves and a fund-raising effort where the proceeds will go to benefit families affected by autism spectrum disorder. For Marc and his family, this means Marc’s racecar would now be in complete www.RACENOWforAUTISM.org livery in an effort to stimulate other racers from all disciplines to help join in on the fund raising effort. The first event raised over a thousand dollars in pledges to benefit a local charity!

For me, the best way to be an advocate is to provide by children with the best resources and programs available for their development and to share my experience and stories with others that may be afraid of what the future holds for their children.

What is autism spectrum disorder?
Autism spectrum disorder (ASD) is a complex developmental disability; signs typically appear during early childhood and affect a person’s ability to communicate, and interact with others. ASD is defined by a certain set of behaviors and is a “spectrum condition” that affects individuals differently and to varying degrees. There is no known single cause of autism, but increased awareness and early diagnosis/intervention and access to appropriate services/supports lead to significantly improved outcomes. Some of the behaviors associated with autism include delayed learning of language; difficulty making eye contact or holding a conversation; difficulty with executive functioning, which relates to reasoning and planning; narrow, intense interests; poor motor skills’ and sensory sensitivities. Again, a person on the spectrum might follow many of these behaviors or just a few, or many others besides. The diagnosis of autism spectrum disorder is applied based on analysis of all behaviors and their severity. (www.autism-society.org)